Tracie Arlington and her son Matt are part of the winning team of Play It Safe Defense. Play It Safe classes offer self defense strategies, mean behavior responses (combat bullying) and physical defense tools for women and children. They have conducted classes for colleges, high schools, local businesses, children's camps, places of worship, community centers, Girl and Boy Scout troops, teen groups, and mother's groups.  Since 2003 hundreds of people throughout the San Diego Area and beyond have taken the Play It Safe courses gaining confidence, knowledge and life saving skills.  Attendees learn to combat and deter attempted abductions, assaults and peer and social conflicts. Tracie and her organization’s work is so important and respected that they have been featured on television programs such as Dr. Phil and The Doctors TV and San Diego Living.

Tracie is the mother of 2 sons and is lead instructor. She has her black belt in Tae Kwon Do. She is also a local speaker to Mom's groups and Women's organizations throughout San Diego County. Her son Matt Arlington, assistant instructor started martial arts at the age 3 ½ and was the youngest child to earn his black belt at their martial arts studio at 10 years old.

Tracie had been a victim herself to relentless bullying and sexual abuse as a youth- she has turned teaching and encouraging empowerment both her life and her organization’s mission.

Tracie shared that she finds immense joy in her work empowering others to protect themselves from harm. There have been multiple cases reported in which children and young women have relied on her Play It Safe tools to fend off perpetrators, avoid and escape the rare but very real abduction attempts.

The most recent case just last month was in Carlsbad, California. A stranger approached a child near her elementary school and tried luring her to his car offering candy- The child ran to her school office and kept herself safe from harm. The child reported to school administration that it was Tracie’s lessons she learned in the Play It Safe assembly at school that reminded her what she had to do.

Tracie became aware of the ever present need of families wanting to learn self protection tools but not necessarily wanting to join martial arts. Tracie then researched and created her “Play It Safe” curriculum.

Thoughts of child abduction, sexual molestation, assault and your child experiencing mean behavior from other children are nightmare-ish and uncomfortable topics for any parent.  Play it Safe approaches the tough topics in such a way  that they present their curriculum with fun, interactive and memorable classes for kids. 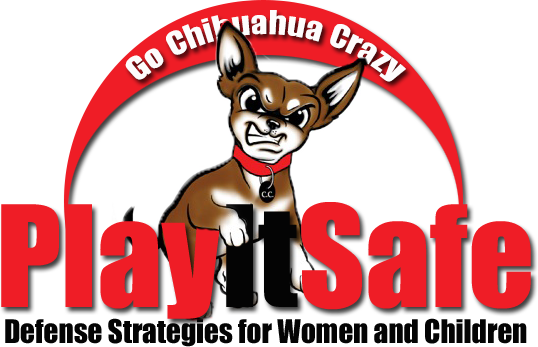 Tracie’s famous chihuahua hand puppet “C.C.” has captured kids attention and imagination.  Tracie’s use of “C.C.” has taught kids how to go “Chihuahua Crazy” to avoid attempted abductions or assaults. Tracie laughs as she explains her inspiration for “CC” came after seeing the movie Beverly Hills Chihuahua. She shared that including a chihuahua in her workshops seemed fitting since they were “small but mighty” just like the children she helps to empower.

Attend a Play it Safe workshop. The information, lessons and tools taught are invaluable. Mention the code "MACARONI" to receive a discount.